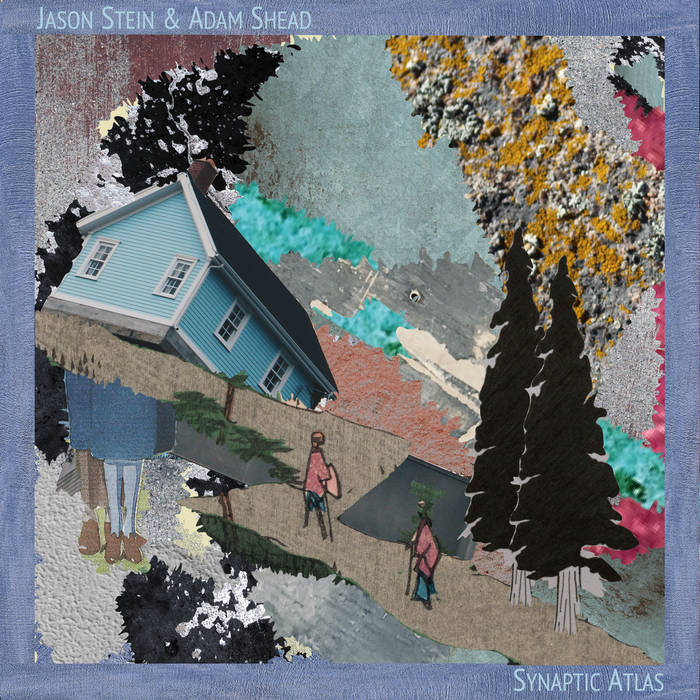 Bass clarinetist Jason Stein and drummer Adam Shead reveal a special rapport on Synaptic Atlas, their first recording together. The album’s eight concise tracks, all freely improvised and recorded live during performances at the Hungry Brain and Café Mustache in Chicago in 2020, find the duo applying a shared language built upon trust and a devotion to being present that draws on the rich history of improvisational practice, particularly the fiercely non-idiomatic aesthetic of British titans like reedist Evan Parker and percussionist John Stevens—both avowed influences for these younger musicians. “I don’t ‘solo’ on this record,” says Stein. “Neither does Adam. We deal with language.” While Stein admits this approach isn’t novel, the duo has nonetheless achieved something special, inhabiting a sound world that’s dynamic in its elasticity, electric in its spontaneity, and profound in its communicativeness.

Stein and Shead are a generation apart, but they both embrace a holistic appreciation for improvised music and its deep jazz roots. Stein, a dominant presence on the Chicago jazz and improvised music scene for fifteen years, has largely been represented on recordings through tune-based projects like Locksmith Isidore, Nature Work, and Hearts & Minds, but pure improvisation is key to his artistic core. Shead, who’s become increasingly active in Chicago since earning a masters degree in contemporary improvisation from the University of Michigan in 2018—programming concerts at the underground space Slate Arts, participating in various ad hoc groupings, and leading his own improv big band Adiaphora Orchestra—reflects the swing roots of radical improvising drummers like Stevens, Paul Lytton, and Paul Lovens. There’s no missing the rhythmic drive within his coloristic investigations, and together they forge active music that’s in perpetual dialog, but for them the conversation is clearly more important than the destination.

The pair first met in September of 2015 as Shead was finishing his undergraduate studies at Columbia College in Chicago and mulling over a decision on entering graduate school. At the time he checked out a gig by one of his favorite teachers, clarinetist James Falzone, and among the members of Falzone’s Early Music Ensemble was Stein, whom the leader introduced to Shead that evening. Stein, who had studied at the University of Michigan in Ann Arbor, recommended the school and the drummer took his advice. Growing up in South Bend, Indiana, the largely self-taught Shead took private lessons with Billy “Stix” Nicks, long-time drummer with Junior Walker & the All Stars, before his interest in jazz had blossomed. “He would never explain form or technique to me, but rather ask me why I think a thing is happening on any given record and making me actually have to think about how that makes me feel in combination of how that works theoretically,” explains Shead. “Billy was so important because he showed me my musical voice is valid, and was the first person to enthusiastically champion my playing, in a way he showed me a way into studying the history and practice of Black American Music through the process of making.”

Shead took his education seriously after enrolling at Columbia in 2011, where he studied under Falzone, percussionist Jarrett Hicks, and bassist Doug Lofstrom, while checking out players like Ken Vandermark, Frank Rosaly, and Josh Berman, which led him to research the music and history of the AACM. “Adam was very into talking about music and improvising and stylistic approaches, and he had an enthusiasm and sense of immediacy about figuring out how to approach playing and being an improvising musician,” recalls Stein. “I really liked his intensity and I’m pretty down to talk about all that stuff even though it doesn’t really come up much normally with folks.” When Shead proposed a duo performance, the bass clarinetist accepted. “I really liked how open and super non-idiomatic his playing was and I liked what it brought out of me and what I felt challenged to play.”

Although Stein has occasionally played in quartet led by Shead, the duo has taken root, affording both musicians an outlet for concepts they don’t always get to explore elsewhere. “If you subtract the orientation of always careening towards a climax or explosion, you’re left with something that I want to explore,” says Stein. “That’s something that Adam understands and feels also.”

Shead agrees, noting that the music was played live in small spaces where “we were kind of fighting for attention, which brings about this propulsion to the music that almost feels live. It’s not so much about volume, speed, or rhythm, which is what is often so enticing in a live setting, but more so the interlocking or constantly moving parts at a dynamically static point. I find that the music’s interest in counterpoint, timbre, and texture provide a really good lens for focus, as it isn’t reliant on things that could be seen to knock you over the head sound wise. Or, I guess, it doesn’t force you to listen.” But it would be worthwhile to force yourself to listen.