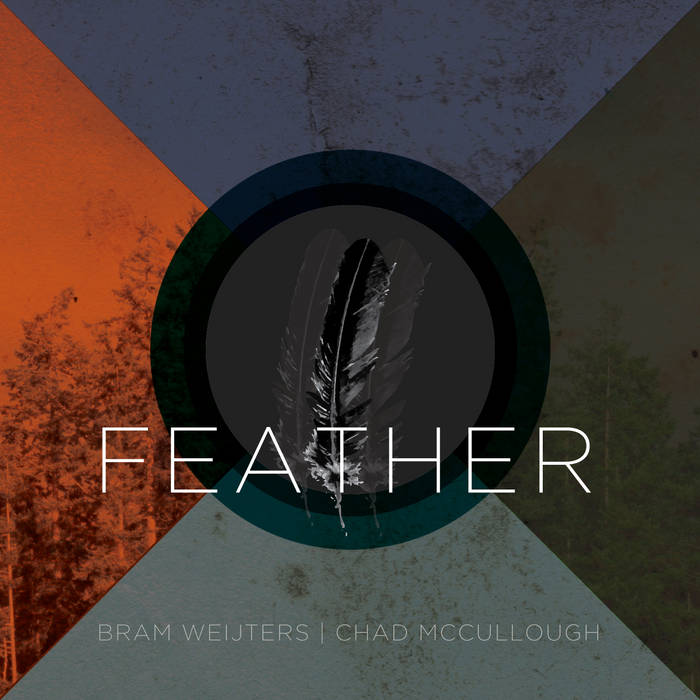 jennie sadler Love the textural combination of bass synth with trumpet. This is an album I keep coming back to. Favorite track: Conclusion.

FOR PLACING ORDERS IN EUROPE/ASIA, ORDER FROM MONKS AND THIEVES RECORDS HERE: bramweijters.bandcamp.com/album/feather

After nearly 100 concerts around the globe with their powerhouse quartet, Bram Weijters and Chad McCullough pair down to the essentials, in their own unique way yielding a moody, melancholic soundtrack to a delicate and often macabre world.

Story: Distance has done little to hamper the creative output of Weijters and McCullough. Though separated by nearly 5,000 Km, they have produced three international releases  with their quartet (Imaginary Sketches, Urban Nightingale, and Abstract Quantities - all on the Origin Record Label) and now bring to light a uniquely intimate project, a contrasting piece, that showcases both musician’s subtleties.

Feather is a 10-track album of original music written by Bram Weijters. Based in Antwerp, Belgium, Weijters is quickly making a name for himself on the international scene as a composer and pianist, and further drives home the point here. His vintage keyboards, synth sounds, and electronic processing provide depth to the unique trumpet-keys duo, and his unwavering sense of time and harmony is the foundation that this music stands so firmly on.

Function for all intents and purposes as a score to a black and white art-film not yet made, Feather is light, and often extremely delicate - yet somehow this music holds immense depth and dark beauty.

Watch the bubbles on top of the lake. The surface tension holds it together with grace, and yet the murky waters hold secrets in the depths below...

The breathy tone that McCullough gets from his trumpet is the perfect timbre to realize Weijters’ twisting and turning compositions. It’s a brittle, almost frail sound, and it immediately draws attention for standing out in a world of cookie-cutter trumpet tones.

There is a wide array of sounds available throughout the album - and the two weave through the combinations seamlessly. With the colors at Weijters’ fingertips, (vintage wurlitzers, and Fender Rhodes abound contrasting with modern analog synths) the complexity of tunes like 'Different Prelude' contrast sonically with the simplistic duo of 'Conclusion' and 'Fluid'. Feather serves as a concise trip down several lonely back alleys of two musicians’ overlapping brains.

McCullough and Weijters first met in Canada at the Banff Centre in Alberta in 2009. Since that time they’ve performed in festivals in Krasnodar (Russia), Seattle, Chicago, Detroit, Portland, Antwerp, and Brussels. Teaming with drummer John Bishop (a legendary figure not only for his Origin Records label, but as a Grammy-nominated, top-tier drummer in American Jazz for over 30 years) and bassist Piet Verbist they have a powerful quartet and tour annually. Critics described the project as "lyrical," "uncomplicated," and "warm".

During those tours and during the preparation of their third quartet record, the two leaders started playing more and more as a duo. You can already hear a couple of duo tunes recorded on Abstract Quantities. At first these pieces served rather as little introductions or interludes in between quartet pieces, but they s gradually became a whole repertoire of full grown compositions on its own.

Their live shows have increasingly featured the duo as a contrast in the sets, and Feather was a logical outgrowth of that. That’s when the two leaders decided it was time for their first release as a duo, which focuses on its more atmospheric side, clouds of keyboard sounds, acoustic piano and Fender Rhodes are combined with lyrical, subtle trumpet playing.